The time is right for alternative economics, for Plan B! Alternative economics means reducing working hours, investing in the infrastructure, emphasizing person-oriented work and labor-intensive investment, in a word social growth instead of conventional growth (cf. “Social Growth,” 2012 http://library.fes.de/pdf-files/id/ipa/08836.pdf. The time of crisis is a time of opportunity, the time to rethink market and state and private and public and reconfigure production and consumption patterns.

The financial sector must be shriveled so it serves the real economy (cf. HR1498-Restoring a Prudent Banking System, http://thomas.loc.gov/cgi-bin/query/z?c112:H.R.1489.) Beguiled by the “masters of the universe,” investment shifted from productive goals to speculative intrigues. The world refuses US financial products; Latin America refuses the Washington Consensus of deregulation, privatization and liberalized markets.

Economics should be a part of life, not a steamroller crushing creativity and self-determination. Economics changes with the times. Once savings was the elixir and then spending was the elixir. Unlike a chair, an idea can be shared by a whole people.

Cooperation and competition coexist. Every business is an example of cooperation and trust. Planning occurs in businesses and in the state. The vital necessities of people should have priority over profit maximization. Businesses depend on public roads and schools. Taxation under Reagan shifted from corporations to individuals with the wealthy reducing their top tax rate from 70% to 35% and corporations 60% in the 1960s to 14% today (cf. chart from Wikipedia Commons on the top tax rate

We face a revenue crisis and a war spending crisis, an elite democracy and fixation on short-term constraints and a propagandistic contempt for the state and the public sector. The empire can and must become a republic. Empires like Narcissus fall in love with their reflection in the pond and drown, Chalmers Johnson explained in “Nemesis.” The welfare state is not Bolshevism but the future of a human society. 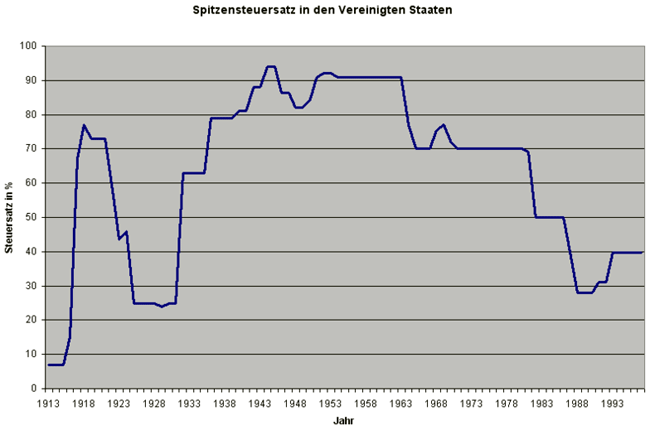 This entry was posted in Alternative Economics. Bookmark the permalink.